When I decided to write about Tim Parks’ new essay collection Life and Work: Writers, Readers, and the Conversations between Them, I didn’t intend to write about panic attacks, anxiety and the emotional toll of the writing life, but these themes curiously bubbled up to the surface. I was also writing it for The Millions, which unlike the Los Angeles Review of Books, for example, avoids straight-up reviews, forcing me to look for interesting themes across Parks’ divergent essays. One of his pieces focused on Samuel Beckett–no stranger to anxiety himself–and this led me to Anthony Cronin’s fine Beckett biography, which helped give me some additional material.

The piece is titled “The Writer is Not Here: On Nihilism and the Writing Life,” and I can also say that when I was reading Parks’ collection, I was finishing my own novel and experiencing a certain amount of anxiety in the process. Not anxiety in the career sense (i.e., have I written a good book?), but at the level of raw nerves, of scratching at emotional wounds, of going deep.

The essay was well received. It has been mentioned in The Paris Review Daily, 3 Quarks Daily, and also in The Rumpus. I suppose the topic is not unfamiliar to writers who “go deep” on a regular basis.

There are times when I’ve found myself skimming through The Paris Review interviews and hoping the interviewer would stop being profound and ask the writers more pedestrian questions about their early writing life: How did you make a living in the beginning? What was your writing routine? How did you write every day and make time for your spouse, kids, etc.? Did you ever have to have a full-time office job?

Now there is a website with writer interviews, The Days Of Yore, that asks the practical questions all writers are obsessed with, including some that are simply fun and superfluous, such as what novelist Jennifer Egan ate in the lean years (apparently “a huge cup of coffee and a corn muffin every morning” from a NYC diner).

The editors, in their own words, write that the mission of The Days of Yore is to focus on that part of an artist’s life (they do not focus exclusively on writers) that delves into the…

“…floating, in-between time when we’re figuring out how to establish and sustain ourselves (and make money) doing what we want to be doing.”

From the perspective of a struggling writer, the interviews reveal how some successful writers have confronted the age-old challenge of creating art amidst the demands of every-day life.

Jennifer Egan, author of A Visit From The Goon Squad, says she worked as a private secretary for a time, which allowed her to write from 8 am to 12pm each day:

“I became a private secretary for this woman, the Countess of Romanones. She had been a spy during WWII…She now had a HUGE contract to write two more books and, you know, her life was spiraling out of control, so I was her private secretary. I worked from 1-6 only and she paid enough to live on. She was very difficult to work for, but I had from 8-noon to write.” 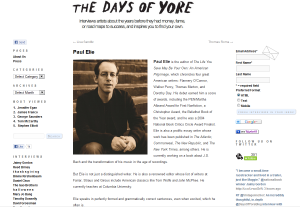 Paul Elie is the author of the book on American Catholic writers The Life You Save May Be Your Own: An American Pilgrimage. He also has a day job (a rather nice one) as an editor at Farrar, Straus and Giroux. He spoke about working on his own writing while working as a full-time editor:

“It’s a strain for me to ‘be a writer’ from 10 p.m to midnight after a long day at work and with children, which is what I do most days now. But what makes it possible is that my writing is mine. Those two hours are the part of the day when I’m not working for anybody.”

George Saunders is the author of the short story collection CivilWarLand in Bad Decline. He worked for years as an environmental engineer and actually welcomed the stability of a full-time job: “I found that I was much more comfortable being a corporate guy, with a steady income, who pushed the rules a bit, than I was being a sort of beatnik, not working, with two kids at home.”

As for his advice to young writers trying to make a living nowadays:

“I think the only defensible position is to sort of say to hell with making a living and put all your energy into making something new, that seems beautiful to you – that is, to try your best to push your work into a new/iconic place and let the chips fall where they may.”