When I decided to write about Tim Parks’ new essay collection Life and Work: Writers, Readers, and the Conversations between Them, I didn’t intend to write about panic attacks, anxiety and the emotional toll of the writing life, but these themes curiously bubbled up to the surface. I was also writing it for The Millions, which unlike the Los Angeles Review of Books, for example, avoids straight-up reviews, forcing me to look for interesting themes across Parks’ divergent essays. One of his pieces focused on Samuel Beckett–no stranger to anxiety himself–and this led me to Anthony Cronin’s fine Beckett biography, which helped give me some additional material.

The piece is titled “The Writer is Not Here: On Nihilism and the Writing Life,” and I can also say that when I was reading Parks’ collection, I was finishing my own novel and experiencing a certain amount of anxiety in the process. Not anxiety in the career sense (i.e., have I written a good book?), but at the level of raw nerves, of scratching at emotional wounds, of going deep.

The essay was well received. It has been mentioned in The Paris Review Daily, 3 Quarks Daily, and also in The Rumpus. I suppose the topic is not unfamiliar to writers who “go deep” on a regular basis.

Andrew Sullivan, who writes the popular “The Dish” column on Newsweek’s “The Daily Beast” website, mentioned my recent essay on Catholic writers in The Millions. The title of his post is “The Poetry of the Latin Mass.” Sullivan writes:

I like that Sullivan adds a video clip from the great documentary Into Great Silence about the spiritual lives of the humble Carthusian monks in France.

Now that I’ve made it into Newsweek (ha!), I’ll have to shoot for Time magazine next month. 🙂 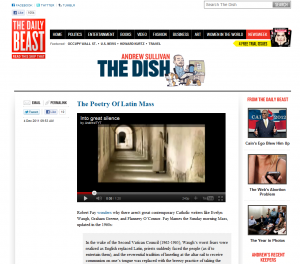 The noted literary critic and blogger Maud Newton recommended my essay on Catholic writers in The Millions. She wrote:

I recommend Robert Fay’s essay about the end of the Latin Mass — and Catholic “drama of salvation” novels — even though I strongly disagree that “the Christian faith [has] been in full cultural retreat since the 1960s.”

In addition to Newton’s blog post, the essay has generated a certain “buzz” across the Internet.

The venerable Commonweal Magazine blogged about the essay, saying in part:

Over at the Millions, Robert Fay has an essay with the provocative title, “Where Have All the Catholic Writers Gone?” Fay tells a story of decline, arguing that there has been a profound falling-off in both the quantity and quality of Catholic writers since the mid-century.

Over in the UK, The Catholic Herald UK linked to the story, but took a curious approach, citing me as the source that writer David Foster Wallace considered becoming Catholic before his death:

It was not me, but Evan Hughes in his New York Magazine story, which I mention and link to in the essay.

I also had the privileged of emailing with the writer Gregory Wolfe (publisher of the journal Image) about the issue of Catholic writers. He left a comment on The Millions where he recommended his own 2008 essay on the same topic.

I recently published an essay on the online literary site The Millions titled, “Paris, Wikipedia and My Middle Age Crisis.”

Each man’s middle age crisis begins at an indeterminate age and offers a peculiar window into the architecture of masculine decline. In this respect it mimics death, which is both punctual and ruthlessly efficient in its demolitions. For many men, the crisis begins with the fear that your Emersonian Self-Reliance is spent, or even worse, you’ve sucked so deeply on the marrow of life that you are now as penniless as Henry David Thoreau . . . Go here to read the full essay.