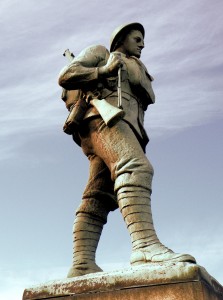 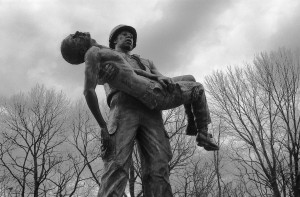 “One doesn’t have any business writing about literature unless one’s business is literature,” writes William Giraldi in his fascinating treatment of critic Adam Kirsch’s new book on Lionel Trilling, Why Trilling Matters. Giraldi notes that Kirsch himself is a throwback to critic-as-intellectual and calls him:

“An Ideal critic of the Coleridgean mold, he possesses a swift command of how history, philosophy, sociology, and psychology inform works of imaginative literature.”

Giraldi references a 1963 essay by critic Stanley Edgar Hyman who believed that a critic must maintain an active engagement with the predecessors of today’s writers. In other words, literature is not simply a product of social inequities or power relationships in the culture, but that writers engage with the great works that came before them; an argument that critic Harold Bloom has been making for years in books like The Western Cannon. 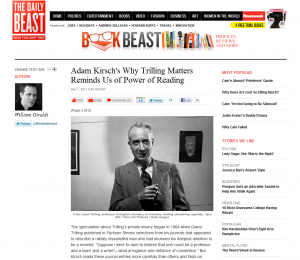 There has been talk for years that Trilling was a frustrated writer. As a professor at Columbia University, Trilling had the young poet Allen Ginsberg in class and was apparently envious of his “Byronic energies” (Giraldi, who is no fan of Ginsberg, asserts he “was start to finish a second-rate poet, his celebrated Howl the sophomoric and technically inept rant of a solipsist.” I’m not sure if it has ever been said better). Kirsch puts an end to speculation that Trilling wanted to be a writer; he accepted in his heart that his métier was commentary, not literary creation.

Giradli writes that for Trilling, reading was everything, and “the literary life was not only an occupation but a way of being in the world, a personal and social commitment to understanding who we are and how we fit.” Indeed a heady and elevated view of literature that should be resuscitated for our own fractured time.

As a writer, former editor and lover of books it pains me to admit that literacy (or literature for that matter) doesn’t—and never will—make one a “better person.” Cambridge professor Liz Disley in her Guardian review of Steven Pinker’s book The Better Angels of our Nature is equally skeptical that The Enlightenment opened up new vistas of empathy and understanding in the souls of men with a resultant decline in violence since 1700 (Was the wreckage of Napoleon, Hitler, Stalin and Mao not taken into consideration I wonder?).

Disley’s approach to Pinker’s thesis is to label it an “elitist” one. She lays out her charge by citing a familiar analysis: literature in the last 300 years consists primarily of works penned by middle-class European and North American men. These elite individuals, the argument goes, generally ignore worldviews, cultures and classes they are unfamiliar with—therefore, the opportunity for literate Europeans to learn more about the mores of Egyptian women, for example, has been stifled.

When it comes to viewing literature in this light, I cop to being a Vladimir Nabokov disciple. In his lecture “Good Readers and Good Writers,” Nabokov notes:

“Nothing is more boring or more unfair to the author than starting to read, say, Madame Bovary, with the preconceived notion that it is a denunciation of the bourgeois. We should always remember that the work of art is invariably the creation of a new world…”

Instead of Disley’s approach, I might simply point out that sociopaths like Josef Goebbels, Adolf Hitler and Saddam Hussein were proud “literary men.”

Nazi propagandist Goebbels studied philosophy, history, literature and art and earned a PhD. As a young man he dreamed of being a writer, and he completed an autobiographical novel and two plays. Then there was Hitler, of course, who was the author of an infamous screed that is still in print to this day.

Most recently we have the example of the bard/dictator Saddam Hussein. In a 2003 Atlantic Monthly article Mark Bowden wrote:

“Saddam has literary aspirations himself. He employs ghostwriters to keep up a ceaseless flow of speeches, articles, and books of history and philosophy; his oeuvre includes fiction as well. In recent years he appears to have written and published two romantic fables, Zabibah and the King and The Fortified Castle; a third, as-yet-untitled work of fiction is due out soon.”

To quote Nabokov again: “Literature is invention. Fiction is fiction.”