The following is an email from Roman Tsivkin to myself regarding an essay in the Los Angeles Review of Books titled “Writing is a Lonely Business: James McKimmey, Philip K. Dick, and the Lost Art of Author Correspondence” by Jason Starr. I think Roman’s letter is both an informative riposte to the essay, as well as a valuable piece of literary criticism regarding the entire Dick oeuvre. Yet even more illuminating is how Roman intertwines his literary criticism with his own struggles to write fiction. The email was published with Roman’s permission. -Robert Fay

It’s been too long, as usual. Loved the link you tweeted to that article on Philip K. Dick (PKD) & McKimmey’s correspondence, but as usual the author of the article got some things wrong about PKD. No, he did not “devolve” into mental illness sometime in the ’60s. He wrote his best stuff in the mid and late ’60s, got increasingly paranoid due to amphetamine abuse (& due to real reasons; the FBI was spying on him from way back in the ’50s, when they sent two agents to “ask” him to spy on fellow Berkeley radicals), tried to commit suicide, moved to SoCal, had a visionary experience (or, if you like, a mental breakdown…but the two are often indistinguishable), and then wrote novels that were even better than his output in the ’60s.

The tendency to view Dick’s later period as being characterized by drug-induced hallucinations, paranoia and mental collapse are a cop-out — he was onto something very, very important. His last works — the VALIS trilogy — are, to put it simply, incredible, and are really all about ontology and metaphysics, something we normally call “religion.” All of his later works tie in to his earlier stuff, so there’s no big break like some people claim…VALIS et al. are a logical extension of his earlier world-buildings and world-views. I’m still trying to digest VALIS and The Exegesis, a process that will never end because, well, hell’s bells, have you seen The Exegesis? It’s goddamn 9,000 pages long; the print version is “only” about 1,000, but it has so much stuff to mull over, I’ll never exhaust its deep mental pockets. Mixing metaphors here, but that’s a writer’s prerogative. 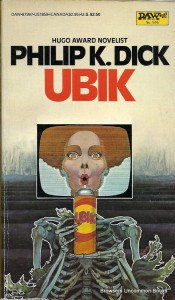 The book that keeps coming up for me lately is PKD’s Ubik which, if you haven’t read it, deals with life and death, mixing the two states up to the point where the reader is not sure who’s alive and who’s dead — not just characters in Ubik, but the readers themselves (well…some readers, anyhow :). PKD has that effect on readers, it’s why he’s become the uber-cultural artifact of our late 20th/early 21st Century existence (of course the movies based on his books helped spread the word to the unworded, i.e., the masses). Somehow he found a way to transform readers via words, a magical/religious ability. And not just transform them in the sense that some other great writers can transform — as in, “wow, this book changed my life” or “I look at the world differently now that I’ve read this book” or “I am now much more attuned to the human condition” or whatever – but rather change them directly, induce mental change, like the spacetime displacement I felt in Santa Ana, Calif., while reading VALIS. The weirdness and sense of irreality I felt at that moment was more “real” than a psychedelic trip, more embodied, and much, much scarier, like I was having a stroke or something. While I’ve had transformative experiences from other writers (Dostoevsky, Bernhard, Joyce, et al.), PKD’s effect on me was much more powerful by great orders of magnitude: while those other writers excited me, made me chew the bone of existence and taste its bittersweet, fatty marrow, PKD’s writings somehow (magically???) made and continue to make me unsure of anything and everything, but with the added and all-important caveat of that existential uncertainty being backed up by a supra-existential certainty.

At the moment, PKD seems to me to be the most important religious writer of our times. (Curiously, the print version of his posthumously published The Exegesis has a gold hardback that’s very reminiscent of the cover of the Five Books of Moses (the Jewish Torah) on my shelf.) The way he was able to reach out into the noösphere and grab hold of the visions he experienced in February and March of ’74, and then write and write and write his way through them, so that his readers were able to not just read about them (the visions, etc.), but experience them through repeated readings…well, that’s just plain Kabbalistic, mystical stuff. He knew not only how to spell, but how to cast a spell. 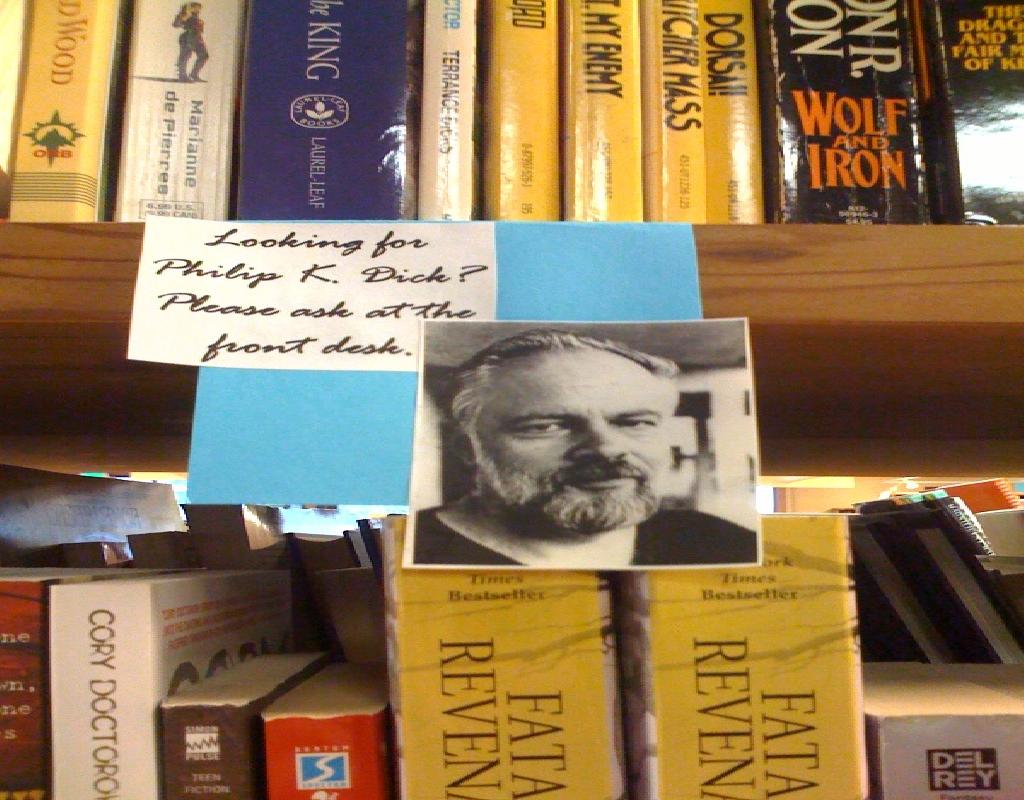 Detour here with PKD…but not really a detour, because it relates directly to what I’ve come to call my “false move” vis-a-vis writing: thinking that words are not trustworthy, that they can easily deceive and cover up instead of uncovering, that I was trapped in a linguistic, artificial universe and that writing just a little bit here and there showed me how writing failed, how my writing failed, and by extension how I failed…all of this was my own deception played at my own expense, and now PKD has somehow pushed his way into my consciousness again (“somehow” is not the term…I felt compelled to revisit his universe; again, his life/death novel Ubik just kept jumping into my mind, uninvited, and I’ve been noticing more and more references to PKD in my daily life, including your tweet a while ago about PKD being some musician’s favorite writer) to show me that there is a way to use words to free me from words, or at least from their tendency to obfuscate what I tasted during successful meditations, that space behind words from which words – or more precisely the linguistic categories we unconsciously impose on our world — arise. I was so in love with silence that I thought words opposed it, and therefore were to be avoided or at least their use minimized. I was simply wrong in that assumption, but the kicker is that I was wrong about it because of my reliance on words in the first place. All that Zen & Taoism stuff I imbibed — I simply misunderstood it. That’s all, a simple misunderstanding that led me down a false path lo these many years. So my new revelation (appropriate word here) is that I can use words to free myself of whatever existential bug has been infesting my system. Perhaps this is the way for me to become a writer, one who uses words and not vice versa. Keep writing, motherfucker. Words are your friends and allies, and most importantly, you can’t live without them.

I just finished a PKD novel I’ve never read before — Flow My Tears, the Policeman Said. Wow. Wow again. Wow yet a third time. It’s a very moving work, so emotional, so much about love and the relationships we have with loved ones. Yeah, sure, there are crazy plot twists and nutty science fictioney scaffolding, but what a book! It just kept getting better and better, and it’s head and shoulders above the novel he wrote immediately before this one, Now Wait for Last Year — which is good (and you can see how PKD’s working out the theme of love in the earlier book) — but then comes Flow My Tears, and WHAM! you’re suddenly reading an amazing, psychologically astute (and how!), book. I highly, highly recommend it. I’m currently going through all the books that I skipped during my ’80s-’90s PKD period, so next up is A Maze of Death, then a revisit of one of my all-time fave PKD books, his last mind-blower, The Transmigrations of Timothy Archer. You really, really should read this book — it deals with Christianity in a much more explicit way than his other books. In fact, I’m surprised you haven’t read it yet (I’m assuming here, but I think I’d have heard from you if you’d read it already). Go get a copy, will ya, so that we can talk about it.

Damn, this is a PKD-heavy email/letter. So be it. Sending now before I change my mind 🙂