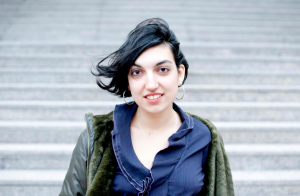 Love this photo of the Irish Novelist Colm Toibin at work. This is indeed the desk of a working writer.

In many ways I’m the last person to appreciate a talk by a famous international chef–I’m picky, American and provincial in my eating habits–yet I found this discussion by Marco Pierre White fascinating and inspiring. He is a charming, intelligent man who understands both his craft and his place in the world. The chef as artist proves true in Mr. White’s case.