Love this photo of the Irish Novelist Colm Toibin at work. This is indeed the desk of a working writer.

“Job creation is a false idol. The future is about gigs and assets and art and an ever-shifting series of partnerships and projects. It will change the fabric of our society along the way. No one is demanding that we like the change, but the sooner we see it and set out to become an irreplaceable linchpin, the faster the pain will fade, as we get down to the work that needs to be (and now can be) done.”  –Seth Godin 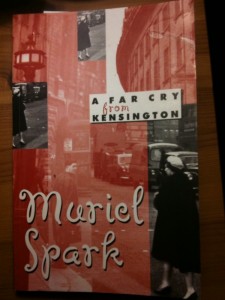 Although I’m tempted to call this talk by Sir Ken Robinson “Humanism Gone Wild”–for Robinson surely views mankind as an immanently perfectible being if only given the right sort of parental and societal support (I don’t share this view )–it is too engaging and interesting a lecture not to recommend to everyone.

It’s excellent news to learn that novelist Walker Percy may be getting more attention with the upcoming documentary Walker Percy: A Documentary Film. A man of the South and a Roman Catholic, his books tackle the big moral and spiritual questions that modern novelists, regrettably, have long since abandoned.

It’s interesting how often his novel The Moviegoer, which won the National Book Award in 1962, is mentioned as a beloved book by writer of all stripes. I recently heard an interview with Pulitzer Prize-winning poet Philip Schultz who cited the book as a special influence on him  as a teenager. “I think it was the first time I read something that provoked in me a level of emotion that painting did,” He said. “I loved Percy’s passion for philosophical insight and his lyrical, ever-spiraling ideas.”

Of his own work, Percy said he was looking for:

A theory of man, man as more than organism, more than consumer––man the wayfarer, man the pilgrim, man in transit, on a journey.

The film will appear on PBS next month. Watch a preview: